Most commonly, Barrett's esophagus is diagnosed during an upper endoscopy procedure, or also known as esophagogastroduodenoscopy (EGD). 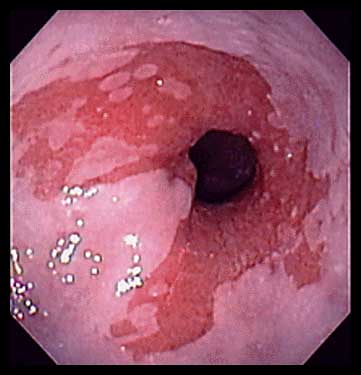 Example of the image seen from the endoscope. The darker red esophageal tissue consists of Barrett's cells.

The endoscopy procedure consists of a thin, flexible tube that is guided down your throat. The tube, known as an endoscope, has a video lens and light at its tip that transmit images to a video monitor nearby. This allows the doctor to visually inspect and capture images of the tissue of your esophagus. The endoscopy procedure is typically performed by a gastroenterologist or a gastrointestinal surgeon in an outpatient office, ambulatory surgery center or hospital endoscopy suite. The procedure typically takes less than 30 minutes to perform and the patient goes home following the procedure.

There are new thin endoscopes that allow the physician to pass an endoscope through the patient's nose to quickly and conveniently check the patient for Barrett's esophagus.

There are also new small capsules with built-in cameras that the patient may swallow and have a physician screen them for Barrett's esophagus.

Once diagnosed with Barrett's esophagus visually, your doctor will also obtain a tissue sample, or biopsy, from your esophagus during an upper endoscopic procedure. The tissue from the biopsy is analyzed under a microscope to confirm the diagnosis and determine the stage of the Barrett's esophagus.